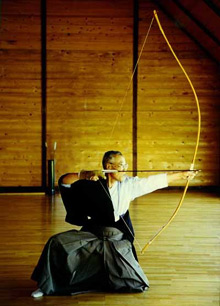 KYUDO: The word Kyudo literally means: the way of the bow. Written origins reach back to the 8th century.

This bow was one of the most fearful weapon on the battlefields until the 16th century.

Then firerarms started to spread thorough Japan, and the bow as weapon was left behind.

Whit this, the spiritual side of kyudo came into view.

The samurai kept these traditions for centuries, and different schools still teach the way of the bow nowadays.

The biggest difference between traditional archery and the yumi (the Japanese asymmetrical bow), is that the yumi could be
2,4 meters long, and no sighting devices are used to make the shots, which are always ceremonial.

To reach the level of a master, one need to learn and better themselves constantly.

Because it can be said for every traditional Japanese weapon, that not the weapon, but the user will be perfected by using it.
Practicing kyudo needs not only physical, but psychical and spiritual strength as well.

The kyudoka (the archer) while constantly bettering their own technique will also learn about themselves.